Coronavirus, how to navigate the confusion of data

The John Hopkins coronavirus virtual map: a real time update based on the Who data. This photo frames today (April 15, 2020)

An English study has recently claimed that there will be like 6 millions of infected only in Italy. Others say that they are now probably around 1 million. Everything is plausible, but most of the numbers that we chase everyday, fed by journalists, are only a guess that must be taken with a grain of salt. Especially today, every “expert” claims this while giving new data. So what should we look at to better understand the situation? The few certain facts and one deeper study that can give a far more positive perspective…

At the moment we have only few certain facts. The others, also considering stats and maps and studies, and even official sources, can be really nebulous due to their rapid changes. In fact many virologists claimed that an epidemic must be read from 2-weeks to 2-weeks, at least. Every single number per day says nothing, but these are the numbers we got from any media, everyday.

So we try to follow the advice, taking in consideration the John Hopkins’s virtual map based on the Who data, the super official source. Looking at the data in a span of 2 weeks (April 1 – 14) we see, in order from the biggest number to the smallest, that today (April 14, 2020) Usa registers 582k (+417k cases in 2 weeks), Spain 170k (+76k cases), Italy 159k (+58k), France 137k (+92k), Germany 130k (+62k). Next comes United Kingdom that is now at 89k. Just 2 weeks ago it was the only one still below China, but now is above, considering that China in 2 weeks goes from 82k to 83k (+1k). The point is that, if until 2 weeks ago the growing rate was similar between countries, now we can see that Italy (and China) are growing slower than the others, so we can probably claims that prior and/or more restrictive lockdowns are giving more results.

The WHO has prepared a “myth busters” section where any doubt is answered… from garlic to alcohol, from antibiotics to vaccines, from hot/cold weather to 5G mobile networks, from hot baths to mosquito bites, from hand dryers to ultraviolet disinfection…

Others claim that data from some country (like Italy, Iran and China itself) can’t be trusted at the moment, in terms of “transparency”. But the truth is that data from any country can’t be fully trusted due to the emergency period, differences in approach and methods, delays on the updates, number of tests, medium age of population… and so on. Also, there’s a big difference between doubts in data “manipulation” and doubts in “quality”. Iss (the official source in Italy, Superior Institution of Health) in its every 2-weeks report writes that “data collected is in a continuous consolidation phase and, as foreseeable in an emergency situation, some information may be incomplete or may be subject to change from one day to the next”. So even 2-weeks aren’t enough if an epidemic is in its course, because you can’t really see the evolution, because it takes time to work on numbers.

The impression is that we still have to wait to get a complete answer… even though the question “why Italy” could seem legitimate. If the numbers of deaths is the only real data at the moment, we still have a series of suppositions difficult to answer. In any case who provides only one reason is not credible. Probably in here we have to consider many and very specific reasons… and a good base from which starting. 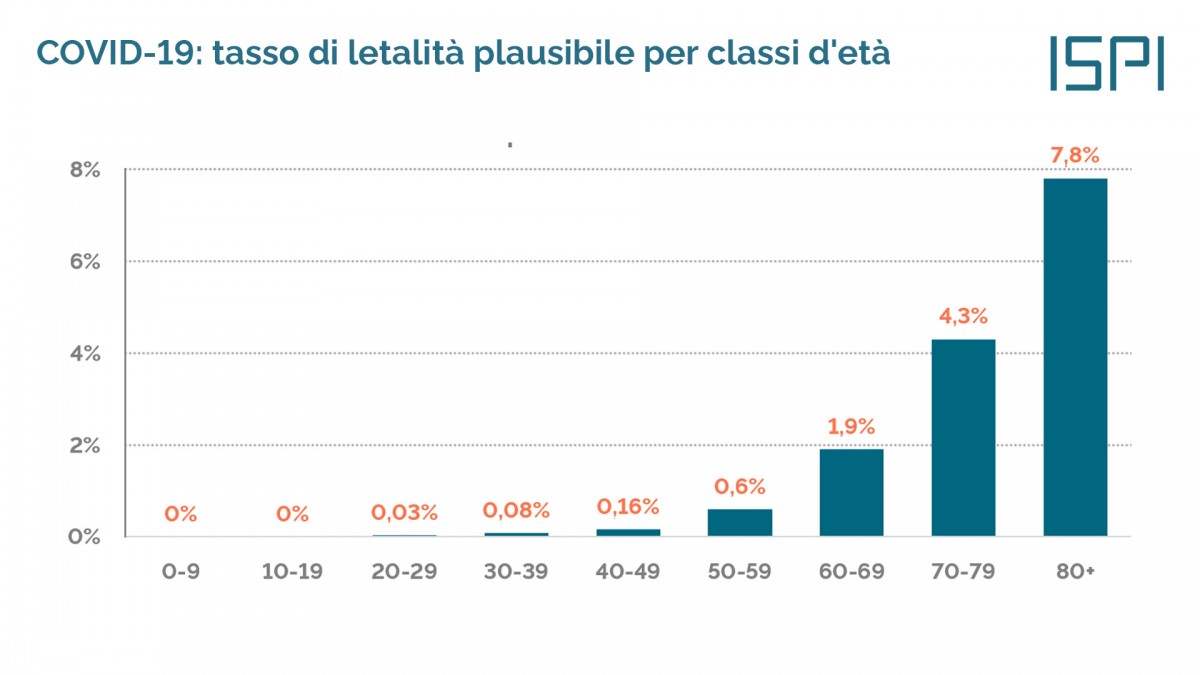 From Ispi online: Infected fatality rate by age class (in UK) is is higher than China’s because Britain’s population is older and, as with many other viruses, COVID-19 appears to be much more deadly for older and more fragile age classes”. So this projection can be also similar to Italy that has a population even older than UK. Data: Verity et al. 2020.

It regards the mortality and fatality rate. They seem synonyms but they are not and internet is full of misunderstandings, even from authoritative sources. Mortality indicates how many dies on the total population, while fatality shows how many dies on the total of the ill population. So fatality rate is always higher than mortality. And also in here many numbers are reported every day, so again we look at our reference, the Iss. Scrolling its report we can see that the mortality rate is not even taken in consideration seen that during a pandemic it changes day by day, but from week to week the fatality rate is raising, even though the cases studied are raising too. Why? Can even the Iss 2-weeks report not to be accurate? Yes it can’t, but not by fault. What Iss can report now is only the “illusory” fatality rate, an “immediate” data that we can have from two “easy” numbers: the confirmed dead and the confirmed positive people. Numbers that anyway change in their turn (the first report dated March 26 regarded a 22k people sample, the second report dated April 9 50k).

(continue with Coronavirus, why Italy?)

DID YOU LIKE THIS ARTICLE? SUPPORT US WITH A COFFEE!

0,90 cent in Italy is the average price for the famous Espresso. Coffee brings energy and you readers too 🙂 Grazie! ❤ P.S. There will be plenty of rewards for the best donors!

NO TIME NOW? SHARING IN ANY WAY YOU PREFER IS A POWERFUL HELP!

The motto of StereoType

“The problem with stereotypes is not that they are untrue, but they are incomplete. They make one story become the only story”.